This 2day safari takes you to Akagera national park for the game drive and Ihema lake for Canoe ride to see animals and Birds. 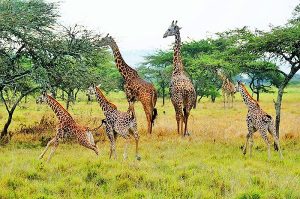 Akagera National Park lies in eastern Rwanda, hugging the border with Tanzania. It’s characterized by woodland, swamps, low mountains and savannah. The varied terrain shelters wildlife including zebras, giraffes, elephants, lions and other primates like olive baboons and vervet monkeys are very common plus hundreds of bird species, such as the rare shoebill stork. In the southern part of the park, vast Lake Ihema is home to hippos and crocodiles.

Akagera National Park covers 1,200 square kilometres (120,000 ha) in eastern Rwanda, along the Tanzanian border. It was founded in 1934 to protect animals and vegetation in three ecoregions: Savannah, mountain and swamp.

The park is named for the Kagera River which flows along its eastern boundary feeding into several lakes the largest of which is Lake Ihema. The complex system of lakes and linking papyrus swamps makes up over a third of the park, and is the largest protected wetland in Eastern-Central Africa.

Short boat trips are available on Akagera’s lakes which will give you the opportunity to get close to the plentiful waterbirds including numerous African fish eagles, marabou stork, crowned cranes, open-billed stork, cormorants, herons and egrets. If you are lucky you may even get to see the elusive shoebill stork.