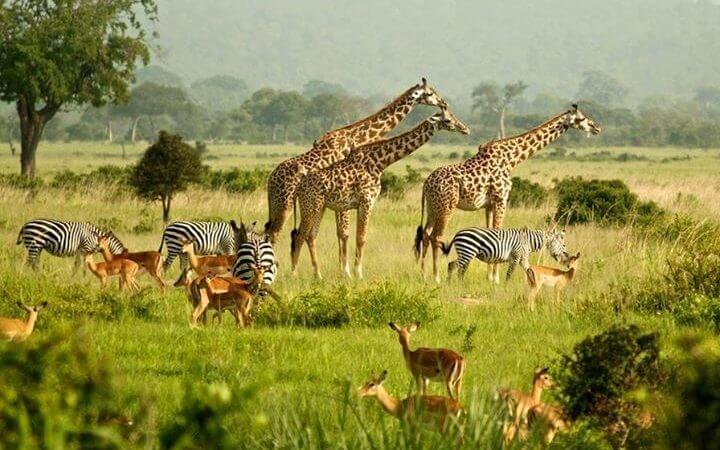 Uganda lies in East-Central Africa and features among a few most magical wildlife safari destinations in Africa. Wildlife viewing in Uganda with a professional guide is the best to explore, take photos of variety of wildlife species while in their natural habitat. Uganda is dubbed the pearl of Africa the fact that it is a home to nearly all that Africa has to offer. It is a home to 10 outstanding national parks and several wildlife reserves but for magical wildlife viewing experiences, below are the best places to visit in Uganda.

Wildlife viewing safaris in Murchison Falls National Park take you through its distinct wildlife tracks especially the Northern track to see huge concentration of wildlife including African elephants, buffaloes, lions, leopards, antelopes (waterbucks, Uganda Kobs, Oribis and others), giraffes, bird species to mention but a few. Murchison Falls National Park is best to explore while on game viewing or game drive and preferably, the dry season (which starts from June-September and December-February) is the best time to consider when planning wildlife viewing safari in this park.

Queen Elizabeth National Park in western Uganda is the second largest national park after Murchison Falls National Park and undoubtedly one of the best destinations to explore while on wildlife viewing safari. It covers an area of 1978sq.kms and dominated by savanna grasslands, lowland and riverine forests, lakes-such as Lake Gorge, Edward and many others. Wildlife viewing safari in Queen Elizabeth National Park takes you through its magical tracks such as Kasenyi or Ishasha sector each of which rewards travel endeavors with astonishing wildlife encounters. Wildlife species to spot out while on wildlife safari at Queen Elizabeth National Park include African elephants, buffaloes, leopards, lions plus tree climbing lions, Uganda kobs, birds that make up a total of 620 bird species to mention but a few.

Queen Elizabeth National Park is best explored while on wildlife viewing safari especially on a game drive along Kasenyi track/Ishasha track or boat cruise along Kazinga channel for you to catch a glimpse at huge concentration of hippos, crocodiles and water birds.

Lake Mburo National Park is not only one of the smallest national parks in Uganda but also the most accessible destinations from Kampala capital city. This park features mostly extensive savanna grassland and acacia woodland, lakes that cover about 20 percent of the park surface area. Lake Mburo National Park is a home to over 350 bird species, giraffes, zebras, leopards, lions, buffaloes, elands, hippos, crocodiles and others.

Kidepo National Park is set in northeastern Uganda about 10-12 hours’ drive away from Kampala. It is that one most outstanding destination to visit for wildlife viewing. A visit to Kidepo National Park rewards visitors with amazing sights at distinct wildlife species including the African elephants, lions, leopards, zebras, giraffes, over 475 bird species, primates to mention but a few.

EXCITING THINGS NOT TO MISS IN UGANDA