Its avast area of mountain Rainforest, ahome to many species of Chimpanzees plus owl- faced and colobus monkeys. Nyungwe Forest National park was established in 2004 and covers an area of approximately 970 km2 of rainforest, bamboo, grassland, swamps, and bogs.

Volcanoes National Park lies in northwestern Rwanda and borders Virunga National Park in the Democratic Republic of Congo and Mgahinga Gorilla National Park in Uganda. The park was first gazetted in 1925, as a small area bounded by Karisimbi, Bisoke and Mikeno, intended to protect the gorillas from poachers.

It was the very first National Park to be created in Africa. The park is known for having arare and endangered Mountain Gorillas and Golden Monkeys. It is home to five of the eight volcanoes of the Virunga Mountains (Karisimbi, Bisoke, Muhabura, Gahinga and Sabyinyo), and spans 160 km2 covered in rainforest and bamboo. The park was the base for the zoologist Dian Fossey.

The park is best known for the mountain gorilla (Gorilla beringei beringei). Other mammals include: golden monkey (Cercopithecus mitis kandti), black-fronted duiker (Cephalophus niger), buffalo (Syncerus caffer), spotted hyena (Crocuta crocuta) and bushbuck (Tragelaphus scriptus). There are also some Elephants in the Park though they are very rare. There are 178 recorded bird species, with at least 13 species and 16 subspecies endemic to the Virunga and Rwenzori Mountains.

Upon arrival at the airport, you will be met by our safari guide and driver who will take you to the Nyungwe Forest national park. This is a 240km journey that takes about 7 hours with stopovers at a number of historical and cultural sites within Butare and Nyanza.

These will include the National Museum and the Old King’s Palace for an interesting cultural exposure. You will have lunch in the town of Butare and proceed to Nyanza arriving in the evening. Dinner and overnight will be at the lodge booked for you.

You will wake up very early in the morning, have breakfast and then go to Nyungwe park headquarters for briefing by the park rangers on Golden monkey trekking rules. You will after the briefing start the trek in search for Golden monkeys in the verdant rain forest.

During the trek you will also get achance to see other primates like the Silver monkey, Rwenzori colobus, Chimpanzees, the Grey cheeked Mangabey, L’hoests monkey and the Owl faced monkey. There after you will return to the lodge for the dinner and overnight.

You will wake up very early in the morning, have your breakfast and then travel to Ruhengeri town near the Volcanoes National park. You will have a tour of this town and also visit the vibrant local markets before heading to your booked lodge for the dinner and overnight. 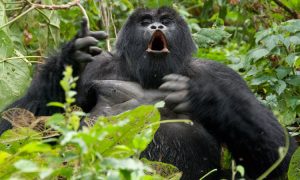 You will wake up early in the morning for the breakfast and after at around 8: 30am  you will go to the Volcanoes national park headquarters for the briefing on the rules to be observed during gorilla trekking. You will be allocated to the gorilla family and the guide rangers will lead you to the gorillas.

The trekking normally takes 2-5 hours and upon sighting the gorillas, it takes one hour to spend with them after which you will return to the lodge for lunch and later visit the twin lakes of Ruhondo and Burera in the late afternoon for a cultural experience. Dinner and overnight will be at the lodge of your booking.

DAY 5.Transfer back to Kigali and departure.

You will wake up very early in the morning for your breakfast and then travel to Kigali city. Depending on your flight schedule, you may also have a city tour in Kigali where you will visit the Genocide memorial sites and the colorful markets for souvenirs before being transferred to the Airport for your departure flight.

Accommodation; In Kigali, the five-star Kigali Serena Hotel is conveniently located (15-30 min from airport), with double b&b. It has a sister hotel at Gisenyi, on Lake Kivu; double b&b, which can be used as a base for gorilla trekking (90 min to park entrance).

Volcanoes Virunga Lodge is more convenient (40 min to 1hr) and has a good reputation but you pay for the spectacular location, which includes all meals and drinks. We can also offer you a variety of other places to stay near the park.

Gorilla permits; Permits to see the Rwanda Gorillas (US$1,500 for foreign residents) are booked through the Tourism and Conservation Reservation Office of the Rwanda Development Board (Included in the price of the safari and we process them for you). Numbers are limited and permits get snapped up well in advance. When to go; The dry(ish) seasons, December to February, June to September – though note that it can rain at any time.