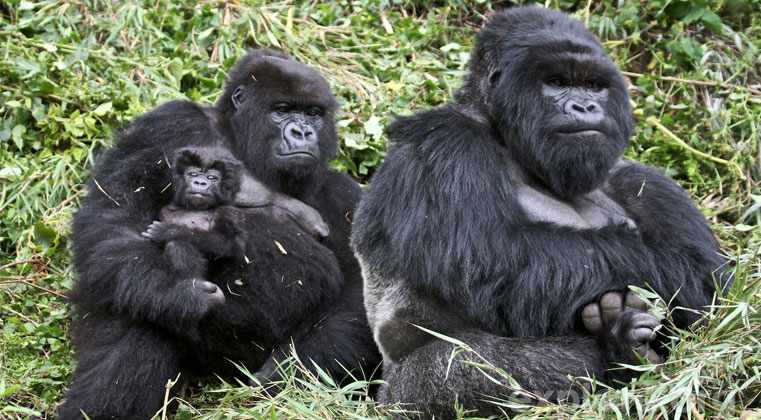 Situated within the south-western corner of Uganda at the brim of the Rift Valley is the lush and spectacular Bwindi Impenetrable National Park, one of Uganda’s most treasured natural possessions. With its beauty and attractions, you can agree that there is hardly a more endowed African destination than this Ugandan Park. Bwindi Impenetrable National Park extends for an area of 321 square kilometers (32,100 hectares) comprising of mainly montane as well as lowland forest.

The National Park’s hillsides are covered by mist and blanketed by one of the country’s oldest and most biologically diverse rainforests that date back to more than 25,000 years with over 400 species of flora. With an altitude ranging from 1160 meters to 2607 meters above sea level, the Park boasts of a rugged terrain that allows the survival of diverse attractions including the famous mountain gorillas.

Bwindi Impenetrable National Park was established into a National Park in 1991 and subsequently declared a UNESCO World Heritage Site in 1994. This fantastic Park is a source of five main rivers that pour their water into Lake Edward and its surface is spread over by steep ridges as well as ridges. This biologically diverse UNESCO World Heritage Site is known for many wonderful things, with the most popular one being the fact that it’s a home to more than half the World’s population of Mountain gorillas distributed across its four regions/sectors.

Bwindi Impenetrable National Park is characterized by a swath of steep mountains blanketed with thick and steamy jungle, making it a haven to over 120 species of mammals including primates such as the mountain gorillas-the stars of the show with at least 16 habituated families within the four regions (Buhoma, Ruhija, Rushaga and Nkuringo) open for tourism.

Other mammals to look out for are primates such as L’Hoests monkeys, chimpanzees, Vervet monkeys, red-tailed monkeys, black and white colobus monkeys as well as olive baboons in addition to buffaloes, antelopes and elephants among others. There are also over 1000 species of flowering plants including 104 species of ferns and 163 species of trees such as the brown mahogany.

In addition to the wildlife, more than 350 species of birds call this ancient habitat home and these include 23 Albertine Rift Species, 4 of 12 Lake Victoria Biome species, 76 of the 144 Guinea-Congo forest biome species, 68 of the 86 Afro-Tropical highland biome species as well as at least 10 of the 26 globally threatened species.  A walk in this thick rainforest with its misty covering will offer an opportunity of catching a glimpse of the hornbills, handsome francolin, white-tailed crested flycatcher, African green broadbill, double collared sunbirds, Rwenzori batis, mountain masked apalis, the grey crowned cranes, western green tinkerbird, Chapin’s flycatcher, Cinnamon-chested bee-eater, yellow-streaked greenbuls, African green broadbill, Shelley’s crimsonwing, chestnut-throated Apalis and turaco among others.

Things to do within Bwindi Impenetrable National Park

Since April 1993, gorilla trekking has become the most famous tourist activity in Bwindi Impenetrable National Park and highlight of a trip with most tourists visiting the destination for this activity. The high altitude areas of the rainforest offer shelter to more than 400 mountain gorillas and 20 habituated gorilla families waiting to be trekked. With the right equipments (long sleeved shirts, long trousers, backpack, camera, binoculars, waterproof hiking boots, rain jacket, gardening gloves) and your gorilla permit, you have a trek in the thick jungles which culminates into a face to face encounter with the giant apes in their natural habitats. With the one hour spent with the gorilla family, you will go back home a totally fulfilled man. Some of the gorilla families to track include Mubare, Habinyanja, Rushegura, Katwe, Christmas, Bitukura, Oruzogo, Kyaguliro, Nshongi, Mishaya, Busingye, Kahungye, Bweza, Bikingi, Bishaho and Nkuringo among others.

Can you imagine spending up to four hours with a gorilla family still undergoing habituation? This is only possible within Uganda’s Bwindi Impenetrable National Park but what makes this activity worthwhile is the fact that you will spend whole 4 hours instead of the usual one hour with a gorilla family, involves less tourists (4 instead of the 8 during gorilla tracking), perfect for photographers, offers value for money and trekkers are likely to learn more.

There is no better way to explore the beauty of Uganda than through nature walks and if you ever visit the Pearl of Africa and nature walks is what fascinates you, then Bwindi Impenetrable National Park is where you have to go. The hiking trails in this Park go through the thick vegetation with muddy trails but the interesting things encountered will make you fall in love with the destination. It’s from hiking that you will be able to explore the unique tree species, primates, birds and many other treasures of this Impenetrable Forest. Some of the must-try trails (most of which in Buhoma sector) include the Mubwindi Swamp trail, Muzubijiro loop trail, Kashasha River Trail, Munyanga River Trail, Habinyanja (Railegh) Trail, Rushura Hill trail, the waterfall trail, Ivy River Trail, Bamboo Forest Trail and Buhoma-Nkuringo Trail among others.

With over 350 species of birds to look out for, Bwindi Impenetrable National Park is one of Africa most perfect birding destinations with at least 23 Albertine endemic species to marvel at. A hike or walk through this Tropical rainforest with its misty covering will reward you a glimpse of the mountain masked apalis, the grey crowned cranes, western green tinkerbird, Chapin’s flycatcher, Cinnamon-chested bee-eater, yellow-streaked greenbuls, African green broadbill and many others.

The Batwa pygmies were the first inhabitants of south-western forests of Mgahinga and Bwindi National Park. These former hunter-gatherers lived in harmony with nature until evicted in 1991 (when the two Forests were gazetted into National Parks), leaving them as beggars and squatters on the edges of these Parks. Visiting them exposes tourists to various experiences including an insight to some of their traditional hunting skills, visit to the traditional man to use how leaves, stems or roots are used to head common sicknesses/diseases, traditional bee keeping skills and how sticks are used to make fire.

Mountain biking is another remarkable way of exploring the beauty of Bwindi Impenetrable National Park and is offered by Ride 4 a woman (a community support group) in Buhoma sector. The ride (3 hours long) usually starts from Buhoma Community Rest Camp riding into the Forest through a number of trails like the Ivy River Trail. The guides are local community members that are well versed with the forest-tress species, bird, animals and other attractions.

In conclusion, Bwindi Impenetrable National Park in south-western Uganda is one of the interesting places in Africa that can’t go unmentioned due to its remarkable attractions and breathtaking activities including gorilla trekking, gorilla habituation experience, mountain biking, birding, the Batwa cultural experience and hiking/nature walks among others.